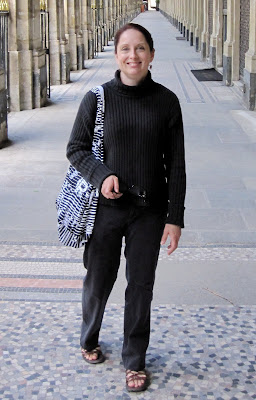 My trip to France was divided into two very distinct weeks, and so far I've only covered the first: my time touring in the southwest, mainly around the Lot Valley, with the Blue Lake Faculty Quintet.

For most of that week, while I was gigging and eating, Deb pursued her own agenda: she first became interested in France and French culture in the 4th grade, when she was introduced to the Lascaux cave paintings, which were not far from where we were in southwest France. (When Deb studies a culture, she likes to start at the VERY beginning...) Since this region was "where it all began" for her -- and, for that matter, where all of French culture began -- she was excited at the prospect of exploring this corner of France, which she'd never visited before.

Though Deb missed out on the extraordinary dining experiences that Gretchen had arranged for the group, she collected her own memorable moments. Deb's a near-native French speaker -- in fact, most folks would call her a native speaker, and regularly in France she was asked where she was from (Belgium? Switzerland?), because they could detect some hard-to-place "you're not from around here" aspect to her accent, but took it for granted she was a native speaker -- but Deb, as a professional in the language field, is very picky about the term "native speaker," which she pretty much reserves exclusively for ... native speakers, born and raised in the language.

Because Deb is fluent in French, she had experiences and interactions with French folks that were not possible for us Persons of Lesser Fluency. For example, she was carjacked by a little old French lady at the Château de Bonaguil.

(It's her story, and she should probably get her own damn blog if it's to be told properly, but basically it amounts to this: Deb went to Bonaguil on her own, several days before I visited it with the members of the quintet. An old woman spotted Deb at the château, chatted with her briefly about the unreliable cellphone coverage in the area, and then mysteriously appeared next to her in the parking lot at the exact moment she was retrieving her rental car. "Do you have a car?," she asked, as Deb was opening the door to the quite obvious and tangible car that she did indeed have -- in other words, at the point where plausible deniability ceased to be plausible.

"Then you could give me a ride to the train station at [Unintelligible Name of Town]."

Deb, very game, said "Okay. But you'll have to give me directions to that town -- I'm not from around here, and I don't know it."

"Fine," the woman said, opening the door and getting in.

As Deb pulled out of the parking lot, she asked "Which way?," and the woman replied, "I don't know. You'll have to ask. That's why God gave us mouths..."

And so it went: Deb used her God-given mouth to ask random French people on the narrow roads of southwest France how to get to Unintelligible Name of Town -- which by then Deb had actually deciphered the name of -- and she had a nice little adventure with a nice little old French lady.

Children: please take this lesson to heart. Study a language diligently, and if you're lucky you might grow up to be carjacked by a little old lady in the country of your target language.)

Our new home in Montcabrier... 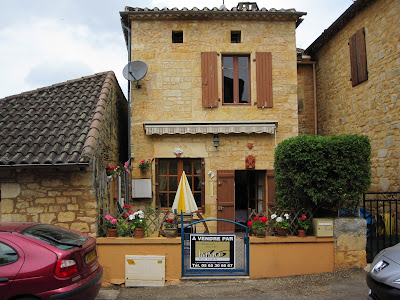 We first spotted the church at Montcabrier on a hill high above us. What appeared at a distance to be a ruin, a lone triangular wall with holes where windows had been, was actually the very intact church's very intact bell tower. 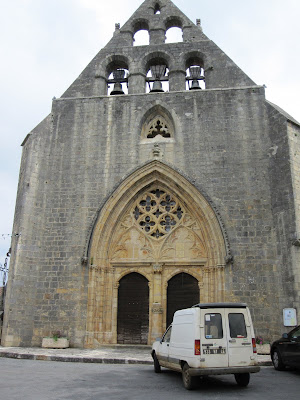 Inside, it was cool and dark, but my camera cheerfully did whatever internal processing it does to make it seem as if the interior glowed with a miraculous inner light. 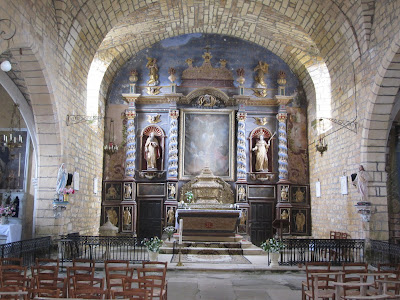 Gretchen, who knew that Deb had fallen in love with this part of France, called me over to take a picture of a little place for sale, right next to the church. She had me make sure to get the sign with the real estate agency's phone number into the shot, so we could call and find out the price. I dutifully framed the shot, and we called the number a week later while we were in Paris.

The perfect ending would be that we bought the house and lived in the southwest of France happily ever after, as I could easily imagine sipping Cahors wine while sitting in the little courtyard of our little place in Montcabrier, overlooking the church and the town square.

The less perfect ending would be that we didn't ... quite ... have the Euros necessary to buy the little house. And our time in the Lot region was nearly up.