My Macbook’s on my lap and I’m watching a trailer for the new Bond movie that opens this weekend: physics-defying motorcycle jumps, gorgeous scenery and general mayhem, apparently the exact sort of violent and absurd travelogue I’m looking for from this franchise, because I’m thinking to myself Hell yeah I’ll check this out.
The trailer ends and at the moment of Bond’s last gunshot “APRIL 2020” appears on the screen — the month it was originally to have been released — and I shock myself by bursting into tears.
That Fucking Lost Year. That Fucking Plague Year.
I spent 2020 more than chest-deep in Done But Not Divorced Yet, a dense opaque substance as black and viscous as tar; light can’t escape from it; simple movement through it is an exertion. 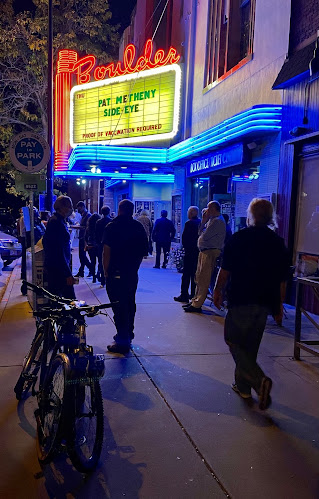 I soaked in it, I slept in it. Every morning I woke up dead tired, secure in the knowledge that tomorrow would be worse, that before long this shit would be well over my head.
While my personal world was a shambles, ashes at my feet, the Actual World, the Real World: oh, that was ALSO falling apart!
“APRIL 2020” was a reminder of a Lost World and a punch directly to my heart. Because I need to brace myself when I take punches to the heart, tears formed for a moment before I was able to tell myself Oh jeezus man COME ON.
Which is probably an odd preamble to say that Pat Metheny was a GIFT to me and (based on the audience response) Every Single Person in the Boulder Theater last night. He was nourishing and uplifting and centering. The music was beautiful and surprising and to me profound, but his underlying message was really quite simple:
“Hey, Everybody: I know we’ve been though THAT — but NEVER forget, there’s also THIS!!!”
at October 08, 2021 No comments: