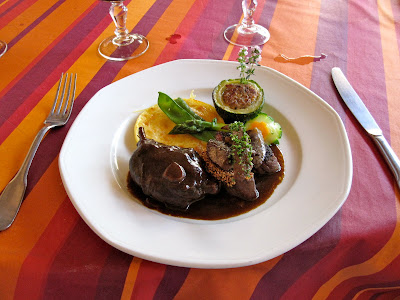 Red wine and olive oil form the basis for most versions of the "Mediterranean diet." Locals in Quercy and the Lot Valley, in the heart of southwest France, point out that there's a third key component for healthy eating and long life: duck fat. It's entirely possible, even likely, that a meal without foie gras will kill you.

(As it turns out, duck is not the only specialty of the region's cuisine -- walnuts are another. So walnuts are also probably vital to life as we know it.)

I'll just say now that I have never ever EVER eaten as well as I did with my Blue Lake compatriots in the south of France. Ever. I've never experienced such a silky foie gras that just melted in my mouth like butter...

[Brief aside: For about 15 years I was a committed vegetarian. There are certain things I'd never eat even today, even as I've lapsed beyond all salvation: veal for instance. And human flesh. (Unless it was prepared in some ridiculously scrumptious way...)

However, even when I was a committed veg, I became uncommitted during my trips to France. I tried once, long ago, on a visit to Paris, to be true to the vegetarian principles I held at the time. It sucked. I had to forgo so many of the things I'd learned to love as a poor pre-vegetarian college kid bumming around the city. I could think of plenty of sound ethical reasons not to eat, for example, a croque-monsieur -- but when it came right down to it, I ate it. When I got back to Minneapolis, I was once again a committed vegetarian. I can't really explain it either, but I am large, I contain multitudes, yada yada.

I don't think you can really "get" some place unless you eat what the natives are eating. For me it's a big part of the cultural experience of a place, and unique cuisines are often for me some of the most memorable aspects of travel. I *know* that foie gras is ... wrong ... I also ate it and was *astonished* by it every single day I was in the Quercy...]

Gretchen had lined up some memorable restaurants for our tour:

La Terrasse, in Grezels: This was our first lunch of the tour, and am I really remembering correctly that it lasted nearly 4 hours? (In fact, after a lunch like that, can *anything* be remembered correctly?) We didn't order anything: lunch is a set menu; once you arrive, the wine and courses start appearing. It's a beautiful thing. The only decision we needed to make was whether the water was supposed to go in the big glass and the wine in the small glass, or vice-versa. It was a test we'd fail over and over again during the tour.

It was also my first duck of the trip, but oy-vey it wouldn't be my last -- in fact, if you're a duck, please make it a point to consider the entire Quercy region a no-fly zone. I'm serious about this. Just don't risk it. Fly somewhere else. You *will* be eaten, and you *will* be delicious.

Auberge l'Imhotep, in Albas: Fritz and Gretchen discovered this place entirely by accident; they walked in one day to check it out and jazz superstar James Carter was playing on the stereo. This is an extremely unlikely thing to hear as background music in the southwest of France. Now, Fritz and Gretchen have a hardcore personal history with James, as do I -- in fact, mine is even harder and corer -- and it turned out James was the owner's favorite. Jazz is the music he loves, and it's what plays in the background -- if clients don't like it, they can leave, he says. After a marvelous meal (duck was involved), we played a little informal concert: Tom and I grabbed our horns, Matt hauled over his bass, Tim swung with nothing but a snare drum, while Steve fingered air piano with Cecil Taylor intensity. In a warm and wine-cheered post-meal haze we played, between burps, All The Things You Are and Bye Bye Blackbird. (Looking back now, I realize we should have played All The Things You Ate and Bye Bye Duck...)

(A little more than a week later, in Paris, I mentioned to Deb what a weird name "Imhotep" was -- I mean, I wonder where the hell *that* came from, what a strange and not very French word -- and she said "You mean Imhotep the ancient Egyptian chancellor-priest?" I replied, "Well, yeah, of course there's THAT Imhotep, I mean, DUH!, but still, you know, it's a funny word." This is what life is like with Deb, who is all-knowing and all-powerful, except when it comes to current events...)

Restaurant Claude Marco, in Cahors: this was, I believe, the first meal where I actually took a picture of the plate set before me -- it was just that beautiful. Now, I'll admit that I felt a wee bit self-conscious snapping a photo of the entrée: we were in a lovely and fancy Michelin-starred establishment, and I realized there was a danger that taking a shot of the food on the plate might make me look like one of the Beverly Hillbillies marveling over the "Cee-ment Pond," but it was so dag-burn purdy that I just couldn't help myself. 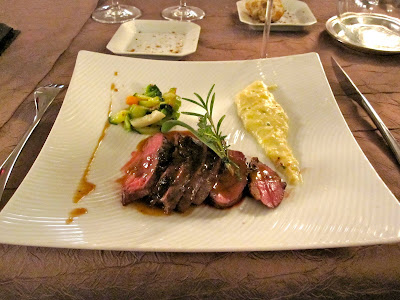 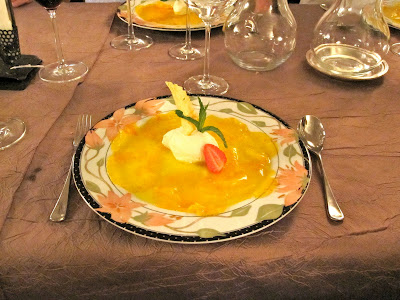 La Récréation in Les Arques: this was probably my favorite meal of them all. It wasn't just the food, which was transcendent: my entrée, the titular canard served every which way, is the photo that begins this post. The service, the setting, and everything else was magical.

Hostellerie le Vert in Maroux: it was our last night in the Quercy, and I felt like I'd cut enough of a path of destruction through the resident duck population, so I ordered the beef, saignant. Glorious.

After this night, Deb and I would be in Paris. We never had a meal that could match *anything* I'd eaten at these places. But still we ate very well...
at June 07, 2009

Email ThisBlogThis!Share to TwitterShare to FacebookShare to Pinterest
Labels: food