A little-known fact about Matt Heredia

As I've mentioned in a previous post, Matt was added to the tour very late in the game, and as a consequence did not undergo the extensive vetting process that Blue Lake typically puts its touring faculty through: the cheek swabbing and complete genetic history; the bracing and increasingly specific body cavity searches; the spelling test.

As a result, Matt brought along some unexpected "baggage" that none of us knew about until the tour was well underway. Matt called it "the troubles": he'd say "I'm sorry guys, but I can feel 'the troubles' coming again." The initial onset was slow, but when Matt was fully in their throes he'd become violent, foaming at the mouth and lashing out at anyone (or anything) near, all the while ranting incoherently. A true Ugly American. 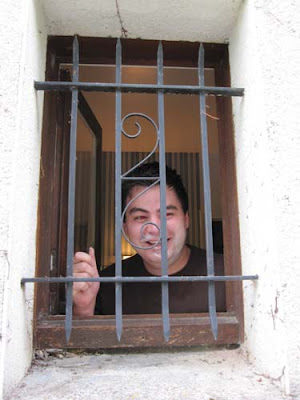 Fritz and Gretchen had a special chamber constructed, with bars on the windows, where we'd put Matt whenever the troubles hit him. He'd stay locked in there, no danger to himself or to others, until the troubles subsided. We each had to take turns cleaning the chamber after one of his episodes (Matt was too weak by then to do it himself) -- an extremely unpleasant task, and really the only unappealing part of the tour, as far as I was concerned.
at June 07, 2009