I bought this camera right before the trip, a Canon PowerShot SD780, and it's chock full of features I haven't explored and will probably never use. One of the most interesting things it does is that it somehow "reads" people's faces, and if their eyes are closed, it won't take the picture.

This is for real. I tested it by asking subjects to close their eyes while I snapped the picture -- when they did so, I'd push the button, and ... NOTHING WOULD HAPPEN!

I can't really show you this feature in action, since by definition if one's eyes are closed it won't take the picture, and no picture equals no documentation. So I can only tell you about it and hope for the best.

Also, unfortunately, once you start talking about this, people start, you know, *thinking* about their eyes as you're taking the shot, resulting in photos like this: 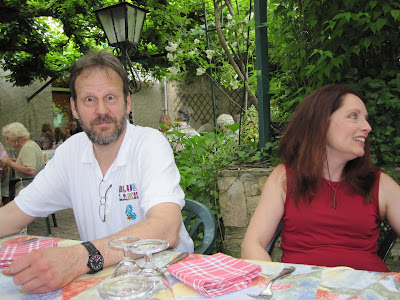 Or like the following, where Deb and Tim look like okay-but-not-entirely-lifelike models from the Puy l'Évèque Wax Museum: 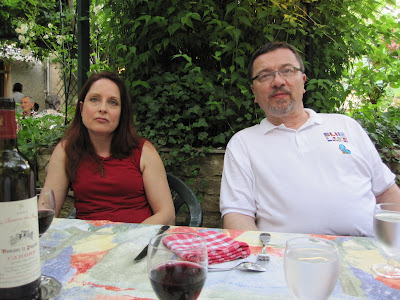 It also results in a photograph's subject, once armed with this information, having veto power over your photographing them. In the following gig photo from the Hotel Henry soirée (more on that later), when Tim saw I was trying to get a shot of him playing he shut his eyes and put me out of business! Only when he opened his eyes could I get the shot: 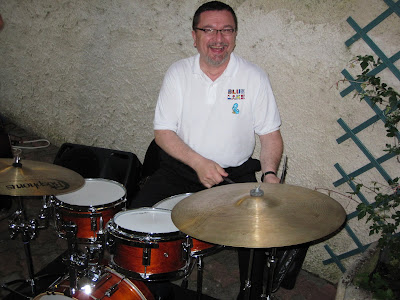 I was explaining this cool and somewhat creepy feature to Fritz and Gretchen at the Restaurant Claude Marco in Cahors, and Fritz immediately squeezed his eyes shut and said "Prove it!" I point the camera at him and ... it takes the shot! Fritz unambiguously shuts his eyes, I squeeze the shutter and ... have this lovely portrait as a result: 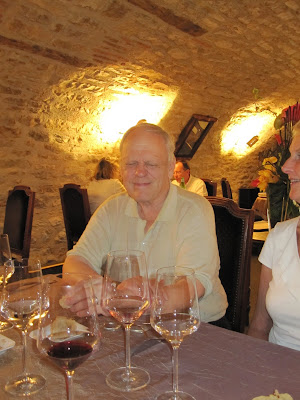 I finally found an explanation in the manual for what was going on -- there's an asterisk in the section describing Canon's Face Detection Technology (tm), and in small print at the bottom of the page it reads, and I quote: "*Does not work with Fritz Stansell."
at June 06, 2009